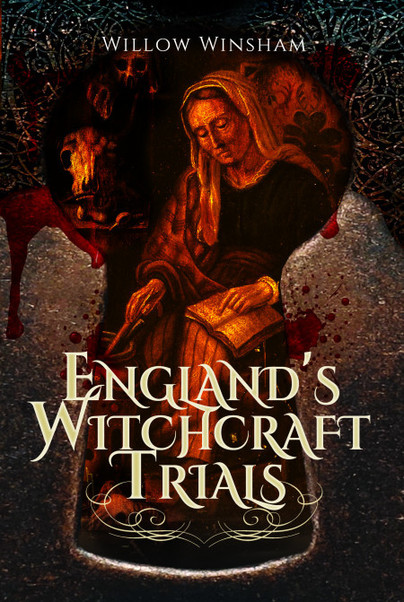 Thou shalt not suffer a witch to live.

With the echo of that chilling injunction hundreds were accused and tried for witchcraft across England throughout the 16th and 17th centuries. With fear and suspicion rife, neighbour could turn against neighbour, friend against friend, with women, men and children alike caught up in the deadly fervour that swept through both village and town.

From the feared “covens” of Pendle Forest to the victims of the unswerving fanaticism of The Witch Finder General, so-called witches were suspected, accused, and dragged into the spotlight to await judgement and their final fate.

This is one of the treasures Rosie at Pen & Sword sent me last week.

This is an excellent book, the author clearly describing events over a hundred year period from 1582 to 1682, during which approximately 300 people were hung for witchcraft in England. The five chapters each cover fairly well-known cases, although I’d only heard of two of them before reading this book. The work of Hopkins – The Witchfinder General – in Bury St. Edmunds in 1645, and the executions Pendle Witches of 1612, have inspired books and films. The other trials in the book have been less sensationalised in modern times although at the time pamphlet writers didn’t let truth get in the way of a good story. Winsham draws on these accounts and legal documents to explore not just the events but the family connections of those involved, the possible reasons they were targeted and some of the events and conditions in England at the time which might have influenced the trials and accusations.

It is clear from reading the first hand accounts – written by the ‘winners’ and those with something to gain – that the ‘witches’ were usually those on the periphery of society who during volatile social, political and religious times were easy victims, people who were already considered a nuisance to their neighbours, either for being ‘naughty’, bad tempered, elderly, beggars, litigious or were feuding with their accusers over something. Throw in economic strains and food shortages, leading questions from justices and interrogators and you have a recipe for massive miscarriages of justice. It is interesting to note that over the century many of the crimes imputed to the ‘witches’ changed from those commonly believed – such as a witch making someone sick using images, or making food and drink go off – to those found in scholarly works, often from Continental sources – such as imps and sex with the Devil. It seems to reflect more the beliefs of the interrogators than the interrogated.

This is a book that rewards reading, with an extensive bibliography and notes for those interested in more details. I certainly recommend it to those with spurious ideas about witchcraft and the history of persecutions in England.