Sarah Kurchak is autistic. She hasn’t let that get in the way of pursuing her dream to become a writer, or to find love, but she has let it get in the way of being in the same room with someone chewing food loudly, and of cleaning her bathroom sink. In I Overcame My Autism and All I Got Was This Lousy Anxiety Disorder, Kurchak examines the Byzantine steps she took to become “an autistic success story,” how the process almost ruined her life and how she is now trying to recover.

Growing up undiagnosed in small-town Ontario in the eighties and nineties, Kurchak realized early that she was somehow different from her peers. She discovered an effective strategy to fend off bullying: she consciously altered nearly everything about herself—from her personality to her body language. She forced herself to wear the denim jeans that felt like being enclosed in a sandpaper iron maiden. Every day, she dragged herself through the door with an elevated pulse and a churning stomach, nearly crumbling under the effort of the performance. By the time she was finally diagnosed with autism at twenty-seven, she struggled with depression and anxiety largely caused by the same strategy she had mastered precisely. She came to wonder, were all those years of intensely pretending to be someone else really worth it?

Tackling everything from autism parenting culture to love, sex, alcohol, obsessions and professional pillow fighting, Kurchak’s enlightening memoir challenges stereotypes and preconceptions about autism and considers what might really make the lives of autistic people healthier, happier and more fulfilling.

END_OF_DOCUMENT_TOKEN_TO_BE_REPLACED

In the summer of 1944, Eva Mozes Kor and her family arrived at Auschwitz.
Within thirty minutes, they were separated. Her parents and two older sisters were taken to the gas chambers, while Eva and her twin, Miriam, were herded into the care of the man who became known as the Angel of Death: Dr. Josef Mengele. They were 10 years old.

THE NAZIS SPARED THEIR LIVES BECAUSE THEY WERE TWINS.
While twins at Auschwitz were granted the ‘privileges’ of keeping their own clothes and hair, they were also subjected to Mengele’s sadistic medical experiments. They were forced to fight daily for their own survival, and many died as a result of the experiments, or from the disease and hunger rife in the concentration camp.

Publishing for the first time in the UK in the year that marks the 75th anniversary of Auschwitz liberation, The Twins of Auschwitz shares the inspirational story of a child’s endurance and survival in the face of truly extraordinary evil.

Also included is an epilogue on Eva’s incredible recovery and her remarkable decision to publicly forgive the Nazis. Through her museum and her lectures, she dedicated her life to giving testimony on the Holocaust, providing a message of hope for people who have suffered, and worked toward goals of forgiveness, peace, and the elimination of hatred and prejudice in the world.

END_OF_DOCUMENT_TOKEN_TO_BE_REPLACED

Nick and Lesley’s desire for a better life in the countryside was a long-held dream. Unforeseen events and a leap of faith forced that dream into reality, but moving to rural Ireland was only the beginning of their story.
Foreigners in a foreign land, they set about making new friends, learning the culture and expanding their collection of chickens and unruly dogs. But their dream home was in desperate need of renovation, a mammoth task they attacked with the aid of a DIY manual, dwindling funds and incompetent enthusiasm. With defunct diggers, collapsing ladders, and shocking electrics, what could possibly go wrong?
Will their new life live up to expectations, or will the Irish weather, dangerous roads, and a cruel twist of fate turn this dream into a nightmare?

END_OF_DOCUMENT_TOKEN_TO_BE_REPLACED

On the Road Not Taken is a memoir about the transformational power of music. It begins with a boy growing up in a small town on the Kent coast in the 1970s, who learns to play the guitar and dreams of heading out on the open road with a head full of songs. But when the moment comes to make the choice he is not brave enough to try and do it for a living.

Time passes but the desire to explain the world through music never goes away. And as the years go by it gets harder and harder to risk looking like a fool, of doing the very thing he would most like to do, of actually being himself. Eventually, thirty-five years later, when it feels like time is running out, he walks out onto a stage in front of 500 people and begins to sing again.

What follows is an extraordinary period of self-discovery as he plays pubs, clubs, theatres and festivals, overcoming anxiety to experience the joy of performance.

END_OF_DOCUMENT_TOKEN_TO_BE_REPLACED

I’ve not reviewed an audiobook here before, although I listen to them regularly I usually review an audiobook on Audible after I finish it. Rachel’s Random Resources as branched out though and I agreed to listen to this book.

Not just another romance, but a story of escapism, coincidences, friendship, luck and most of all… love.

Chickens Eat Pasta is the tale of how a young Englishwoman starts a new life after watching a video showing a chicken eating spaghetti in a mediaeval hill village in central Italy.

“Here I was, 26 years old, alone and numb with boredom at the prospect of a future which until recently had seemed to be just what I wanted.”

Unlike some recent bestsellers, this is not simply an account of a foreigner’s move to Italy, but a love story written from the unusual perspective of both within and outside of the story. As events unfold, the strong storyline carries with it a rich portrayal of Italian life from the inside, with a supporting cast of memorable characters. Along the way, the book explores and captures the warmth and colour of Italy, as well as some of the cultural differences – between England and Italy, but also between regional Italian lifestyles and behaviour. It is a story with a happy ending. The author and her husband are still married, with three children, who love the old house on the hill (now much restored) almost as much as she does.

Chickens Eat Pasta is Clare’s autobiography, and ultimately a love story – with the house itself and with the man that Clare met there and went on to marry. If you yearn for a happy ending, you won’t be disappointed. It’s a story that proves anything is possible if you only try.

END_OF_DOCUMENT_TOKEN_TO_BE_REPLACED

I’m looking forward to sharing this one with you, it’s a memoir by Icelandic author Thora Karitas Arnadottir.

The swans on the pond, quite abruptly began to sing. It was a singing so loud they were almost screaming. The swans were screaming, screaming as if they saw the horror of the world.

Gudbjorg Thorisdottir has been hiding from the ghost of an ugly secret for most of her life. When she finally faces the truth of what happened throughout her childhood, the ghost floats away. Painting an evocative picture of her life in Iceland, this is the story of a little girl who didn’t know how unnatural it was to experience both heaven and hell in the same house.

Thora Karitas Arnadottir (b. 1979) studied drama in the UK, and is a producer as well as appearing on stage and television. And the Swans Began to Sing is her first published book; her mother’s story, and formed the final dissertation for her MA in Creative Writing. The book was nominated for the Icelandic Women’s Literary prize Fjoruverdlaunin in 2016.

Arriving in New York with a failing relationship and a body she felt out of touch with, Stephanie Theobald set off on a 3,497 mile trip across America to re-build her orgasm from the ground up. What started as a quest for the ultimate auto-erotic experience became a fantastic voyage into her own body.

END_OF_DOCUMENT_TOKEN_TO_BE_REPLACED

Arriving in New York with a failing relationship and a body she felt out of touch with, Stephanie Theobald set off on a 3,497 mile trip across America to re-build her orgasm from the ground up. What started as a quest for the ultimate auto-erotic experience became a fantastic voyage into her own body. She takes us from ‘body sex’ classes with the legendary feminist Betty Dodson to an interview with the former US Surgeon General Joycelyn Elders, who was fired for suggesting that masturbation should be talked about in schools. Along the way, we are immersed in a weird, countercultural America of marijuana farms and ‘ecosexual sexologists’.

Stephanie Theobald is a British journalist, novelist, public speaker and broadcaster known for her playful and
thoughtful work around sexuality and feminism. The Times described her as as ‘one of London’s most
celebrated literary lesbians’ and she writes regularly for the Guardian , the Sunday Times and Elle UK . She is the
author of four novels, most recently A Partial Indulgence (2010). She lives between London and Los Angeles.

Whatever happened in the past, the story wrote right over it. The story became the truth. What you see in Ricky killing Jeremy, I have come to believe , depends as much on who you are and the life you’ve had as on what he did. But the legal narrative erases that step. It erases where it came from. 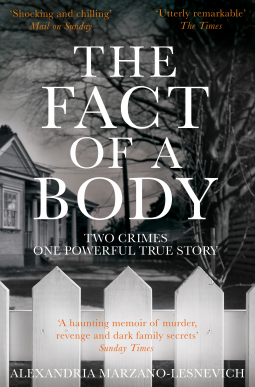 When law student Alexandria Marzano-Lesnevich is asked to work on a death-row hearing for convicted murderer and child molester Ricky Langley, she finds herself thrust into the tangled story of his childhood. As she digs deeper and deeper into the case she realizes that, despite their vastly different circumstances, something in his story is unsettlingly, uncannily familiar. The Fact of a Body is both an enthralling memoir and a groundbreaking, heart-stopping investigation into how the law is personal, composed of individual stories, and proof that arriving at the truth is more complicated, and powerful, than we could ever imagine.