Murder, conspiracy, radicalism, poverty, riot, violence, capitalism, technology: everything is up for grabs in the early part of Victoria’s reign.

Radical politicians, constitutional activists and trade unionists are being professionally assassinated. When Josiah Ainscough of the Stockport Police thwarts an attempt on the life of the Chartist leader, Feargus O’Connor, he receives public praise, but earns the enmity of the assassin, who vows to kill him.

‘Circles of Deceit’, the second of Paul CW Beatty’s Constable Josiah Ainscough’s historical murder mysteries, gives a superb and electric picture of what it was to live in 1840s England. The novel is set in one of the most turbulent political periods in British history, 1842-1843, when liberties and constitutional change were at the top of the political agenda, pursued using methods fair or foul.

END_OF_DOCUMENT_TOKEN_TO_BE_REPLACED

Walthamstow, 1902: Archie and his police sergeant pal Frank Tyrell investigate the disappearance of teenager Lilian and the discovery of a corpse in the River Lea – Eleanor ‘Nell’ Redfern.

Did her father’s ambitious plans to marry her to a rail magnate cause her to run away to her watery doom? And what about Lilian Steggles, a star swimmer with her eye on the 1908 Olympics – what prompted her to disappear from home and where is she now?

Archie uses his artistic skills to identify Nell and thence to track down her story and that of the other victims of a dastardly scheme to exploit young girls for the benefit of lascivious older men.

END_OF_DOCUMENT_TOKEN_TO_BE_REPLACED

William Arrowood, Victorian London’s less salubrious private detective, is paid a visit by Captain Moon, the owner of a pleasure steamer moored on the Thames. He complains that someone has been damaging his boat, putting his business in jeopardy.

Arrowood and his trusty sidekick Barnett suspect professional jealousy, but when a string of skulls is retrieved from the river, it seems like even fouler play is afoot.

It’s up to Arrowood and his trusty sidekick Barnett to solve the case, before any more corpses end up in the watery depths . . .

END_OF_DOCUMENT_TOKEN_TO_BE_REPLACED

The Postmaster looked over my shoulder. As I turned to look I saw a flicker of movement from across the street. I felt unseen eyes peer at me.
He walked away without another word. I watched as he climbed onto his bicycle and sped away down the street. I turned back and looked over my shoulder.
Someone had been watching us.
1904. Thomas Bexley, one of the first forensic photographers, is called to the sleepy and remote Welsh village of Dinas Powys, several miles down the coast from the thriving port of Cardiff. A young girl by the name of Betsan Tilny has been found murdered in the woodland – her body bound and horribly burnt. But the crime scene appears to have been staged, and worse still: the locals are reluctant to help.

As the strange case unfolds, Thomas senses a growing presence watching him, and try as he may, the villagers seem intent on keeping their secret. Then one night, in the grip of a fever, he develops the photographic plates from the crime scene in a makeshift darkroom in the cellar of his lodgings. There, he finds a face dimly visible in the photographs; a face hovering around the body of the dead girl – the face of Betsan Tilny.

END_OF_DOCUMENT_TOKEN_TO_BE_REPLACED


December 1860. The morning shift at Swindon Locomotive Works is about to begin and an army of men is pouring out of the nearby terraced houses built by the GWR. Frank Rodman should have been among them, but he is destined for the grave sooner than he might have expected, or he will be, once his missing head is found.

But Christmas is fast approaching, and the last thing Inspector Colbeck needs is a complex case, mired in contradictions. As he wrestles with one crime, he is alarmed to hear of another – the abduction of Superintendent Tallis. Colbeck and Leeming find themselves in a hectic race to solve a brutal murder before rushing off to Kent in a bid to save the superintendent’s life.

END_OF_DOCUMENT_TOKEN_TO_BE_REPLACED 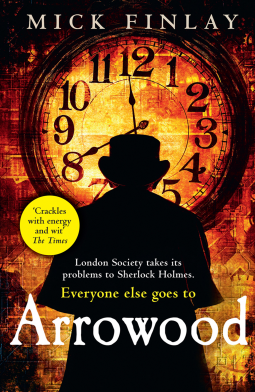 London Society takes their problems to Sherlock Holmes. Everyone else goes to Arrowood.

The Afghan War is over, a deal with the Irish appears to have brought an end to sectarian violence, but Britain’s position in the world is uncertain and the gap between rich and poor is widening. London is a place where the wealthy party while the underclass are tempted into lives of crime, drugs and prostitution. A serial killer stalks the streets. Politicians are embroiled in financial and sexual scandals. The year is 1895.

The police don’t have the resources to deal with everything that goes on in the capital. The rich turn to a celebrated private detective when they need help. Sherlock Holmes. But in densely-populated South London, where crimes are sleazier and Holmes rarely visits, people turn to Arrowood, a private investigator who despises Holmes, his wealthy clientele, and his showy forensic approach to crime. Arrowood understands people, not clues.

This was a very entertaining historical crime novel. Although William Arrowood is the titular character, it is narrated by his ‘Watson’, Norman Burnet. Holmes and Watson are the bane of Arrowood’s life; they get the big cases while he, and Norman, get the petty thefts and wayward husbands.

get pulled into a much more complicated case, involving a local crime lord, War

Office officials and Fenians gun running Enfield Riffles to Ireland. I really enjoyed the complications of the case and the character building, the history woven into the main narrative and the descriptions of London in 1895. The weaving in of the Sherlock Holmes canon makes this novel interesting, as Arrowood gives alternative possibilities for the resolution of some of Holmes’ most famous cases.