It’s been exactly a year since I saw HIM in concert in Nottingham. This is my favourite version of my favourite song.

I wrote what follows on Sunday morning after the concert at Rock City on Saturday night, frustrated by my lack of WiFi and wanting to get something out of my system.

END_OF_DOCUMENT_TOKEN_TO_BE_REPLACED

This is what happens when I get tired, inspired and frustrated by lack of a WiFi connection.

END_OF_DOCUMENT_TOKEN_TO_BE_REPLACED

This sing is seriously beginning to grow on me.

On Friday afternoon we finally got in to the Arena and had a look around before we started listening to a few bands. Mostly we wanted to see Papa Roach and HIM on Friday, everyone else was incidental.

The first band we heard, at least a little bit, was

This band is a heavy rock five-piece from the Midlands.

I quite liked what I heard, although we didn’t stay long, because even outside the tent the bass made my chest hurt. They definitely lived up to their description ‘heavy rock’. They’re very heavy, but in a way I like.

Eventually we retreated to the main stage.

At the main stage we got ourselves comfortable on the grass under our ponchos, and settled down to listen.

And that is a mark of how unimpressed we were by the acts on the main stage on Friday.

About three in the afternoon we decided to join the queue for the HIM signing at the Kerrang! tent, and watched

Papa Roach on the Main Stage while we did.

Jacoby Shaddix gave a very good impression of an over-excited child, just to be at Download Festival. He kept calling everybody ‘Mother fuckers’ and bouncing around. The crowd didn’t seem to respond well to his attempts to get circle pits opening up. They played a mix of songs from their new album and some older songs that everyone recognised.

Later, after some wandering around, tea, collecting a further friend, we returned to the Arena to see

HIM on the Pepsi Max stage

I’ll be honest, HIM were one of the main reasons I decided to go to Download this year. They packed out the tent, despite the competition of Slip Knot on the Main Stage. But then I suppose if a band disappears for three years then their appearances will be popular. It was only their second show in the UK since they came back with ‘Tears on Tape’, (the first was at the London Barfly on 26th April 2013). They performed a mix of songs from the new album and their classics, including ‘Wings of a Butterfly’ and the ever-popular ‘Funeral of Hearts’.

As ever, from what I’ve seen – I’ve never seen HIM live – HIM’s stage show is not showy but enjoyable. They looked like they were having fun; Ville made jokes with the audience, Linde, Mige and Gas had fun with each other on the stage.

Ville’s acoustic guitar has been making an appearance at recent gigs and Friday night was no exception. It was pretty much constantly in hand, and when it wasn’t he was clutching his mike stand. Something has to replace his old crutches of cigarettes and booze, now that he can’t smoke on stage and has had to cut down on the drinking. He was even sober, as far as I could tell from a distance.

One thing I did notice was that Ville couldn’t quite hit some of the notes these days. It was still a great set, and I wish it had been long.

They are touring here at the end of October. I’m going to see them at Rock City in Nottingham, I can’t wait.

I had a good time on Friday, especially in the evening, I soaked up a few bands though I didn’t exactly take in names. It was an experience, being surrounded by all the different bands, hearing bands I’ve heard of but never listened to. I now know what bands I don’t like, as well as the ones I do.

Back tomorrow with a review of Saturday and Sunday’s bands.

You know I said I’d stop fangirling? Well, I lied. I’m back with another post.

I pre-ordered the fan pack as soon as it was available (if I’d waited I wouldn’t have had the money to pay for it). It arrived the on Monday, the official release date and came packaged in a sturdy cardboard container. 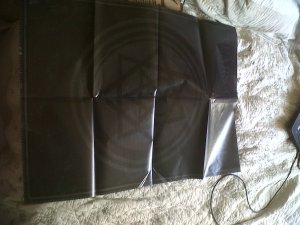 At £14.99 I’d say that was a bargain. Even if you take out the stuff that’s for pre-orders only that still leaves a thick magazine, an album, several bonus songs to download, and a very large double-sided poster. At a quick estimate, let’s say the album costs £10 on its own, the poster, 3 or 4 quid, the magazine is at least £4, plus the downloadable tracks? £2 or £3? So about £20 in total? If you could get any of the extras on their own, which I don’t think you can, that’s good value for money. Now the only decision is, do I hang the posters up, or keep them safe in the packaging?

So, purely from a monetary viewpoint, the fan-pack/collector’s pack is worth it. From a fan’s point of view, the insights into the band, the album and everything that goes with it, the magazine is a treasure house of information. So yes, definitely worth the money if you like HIM.

Firstly let me declare my biases.

Now that’s out of the way I’ll get on with the actual review. Bearing in mind what I’ve just said, and my major fan-girling on Twitter on the morning I received my copy of ‘Tears on Tape’ (29/04/2013), it actually took me a while to get in to the album. It was only on my third listen that it started to grow on me; I really liked ‘Love without tears’ the first time through, and then ‘Into the night’ replaced it as my favourite song on the album. The opening riff on ‘Hearts at war’ is very reminiscent of ‘Love Metal’ era HIM.

Ville Valo’s voice has definitely changed in the last few years; it’s not as strong as it once was although he still manages to carry the songs well, and reprises of old hits ‘Buried alive by love’ and ‘Kiss of dawn’ – live from Finnvox, show that he can still sing their older material. Linde’s riffs are great, Mige’s bass sits quietly in the background holding things together, Burton is still a virtuoso on the keys and Gas is still hitting those drums way too hard. I really like the intro ‘Unleash the red’; it sets the tone for the whole album right from the start. More bands should have instrumental intro’s on their albums.

The more I listen to this album the more I love it. It definitely requires listening to several times to really get in to it and hear all the different aspects and, since the lyrics aren’t in the album, to understand precisely what is being sung, but it repays the time in the quality of the work and the pleasure I get from hearing these gents again. HIM have managed to produce another album of melodic, dark and heavy tracks that reference in their sound all their influences. I like the ‘dirty’ effect they’ve managed to get, like you would hear on a real cassette tape as it warps and changes with being played.

The album artwork, by Daniel P Carter, is rather gorgeously gothic; the new evolution in the

heartagram as a sigil, the skulls, bleeding hearts and

beautiful geometric work is so very representative of HIM, yet so different from their previous album sleeve artwork. I love the cover; it reminds me of the sea under storm clouds. It also reminds me of the afternoon just after the cover art was first released that I spent with my nephew trying to decipher the lyrics written in the world snake. We had fun, and managed to translate the writing (my nephew was very proud of himself). I’m a sentimental git, the music appeals to me, what can I say?

The thing that made me laugh most was the way the album credits were concluded with ‘Ta & Ta Ta’ – thank you and goodbye in Midland’s English (someone’s been hanging around in England for too long methinks).

Right, I’m going to stop verbally fan-girling now and try to sum up.

This album is HIM; it references so many of their influences and yet is different from all of them, it’s a bit heavier than some of their earlier stuff, being closer to Love Metal than Screamworks, and it needs a few listens to really get in to, but it grew on me. A great addition and evolution to the band’s body of work.

Yours, in sonic insanity,

I’m listening to it now; full review to follow when I finish fangirling.