It is the 23rd century. Aiden, imprisoned, stares up into a tiny square of sky. A prominent member of the rebellion, he expects to be executed. Aiden is
battling the Xirfell rulers, whose King oppresses many planets, the Earth
included.
But the Xirfell have executed their king and installed a new ruler. The populace riots. Amid the tumult, Aiden is sworn in, the leader he’s always longed to be.
Never one to fit in, he must re-discover himself, as an indigenous Australian, as a fighter, as a lover – and as a leader.

Alice McVeigh (writing as Spaulding Taylor) was born in Seoul, South Korea, and grew up in Southeast Asia. After surviving her teenage years in McLean,
Virginia, and achieving an undergraduate degree in cello performance at the internationally renowned Jacobs School of Music, she came to London to study cello with William Pleeth. There she worked for over a decade with orchestras including the BBC Symphony Orchestra, the Royal Philharmonic Orchestra, and Sir John Eliot Gardiner’s Orchestre Revolutionaire et Romantique. Alice was first published in the late 1990s when her two contemporary novels (While the Music Lasts and Ghost Music) were published by Orion to critical acclaim.

The safe world of the Pale is under threat.

Inside the policosmos, the new Regent Adaeze strives for dominance over the all-powerful Senior Forecaster, but the Pale’s humachine citizens are unaware that their city is close to collapse.

Outside on Broad Plain, the exiled human Hector undertakes a dangerous trek to find a safe haven for the orphaned twins.

How can anyone survive as their world shifts underneath them?

END_OF_DOCUMENT_TOKEN_TO_BE_REPLACED

Several generations after ‘The Fall’, the scattered clusters of civilisation that grew in its wake live in ignorance of the past. No-one wants to know what caused such devastation or why. No-one, except Ethan. Ethan used to believe in the guardians; mysterious lights in the sky that, according to folklore, protect the survivors, so long as you believe in them. But the death of his parents shattered his faith and forged within him a hunger to know more. One night, a light grows brighter in the sky and crashes to the planet’s surface. Ethan then embarks on a heartbreaking journey in which harrowing discoveries unveil the secrets of the past, and place him at the centre of a deadly conflict. Powerful, thought-provoking and emotionally absorbing, The Planetsider is a gripping, post-apocalyptic thriller that will keep you hooked until the very end.

END_OF_DOCUMENT_TOKEN_TO_BE_REPLACED

Twelve-year-old Charlie Watkins could have inherited his dad’s massive intellect.
He got his massive feet instead.

Perhaps if Charlie had that intellect he might have been able to figure out why so many men in suits were suddenly following him or where his dad hid the Cubit – a mythical object that men have sworn to protect and even more have died trying to possess – before his so-called accident.

If starting yet another new school wasn’t bad enough, Charlie meets Mr Leopold, a disfigured, mind-reading lunatic and discovers that he alone must find the Cubit if he is to save his dad. The Brotherhood, however, have other ideas. Led by the ruthless Draganovic, they will stop at nothing to get their hands on it. With the help of Mr Leopold and fellow new boy Elvis, Charlie sets out on The Cubit Quest.

Hunting for the Cubit, playing football, lessons with the dreaded Funeral Face and unsuccessfully avoiding school bully Grimshaw by day, Charlie finds his nights no less complicated. Stalked in his dreams, he’s soon immersed in a world of power struggles, battling dragons and duels to the death. With the Brotherhood hot on his heels and as the bullets begin to fly, there are no guarantees that Charlie, or anyone else, will make it to the end in one piece.

END_OF_DOCUMENT_TOKEN_TO_BE_REPLACED 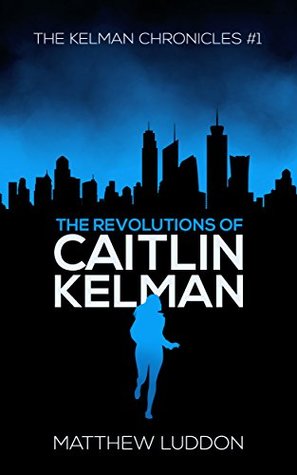 Can sixteen-year-old Caitlin Kelman bring down an Empire?

Caitlin is sixteen when her parents are captured by the Empire. Fleeing to Dominion City, Caitlin looks for answers, fighting soldiers, kidnappers, and stalkers along the way.

An illegal immigrant with forged papers, Caitlin falls in with a mysterious group calld the Stateless, who are fighting to bring down the Empire, once and for all.

One day, she runs into Alec, a boy from her hometown, who wants to help her return to her old life. Her normal life.

Will she settle for a life with Alec? Or will she join the revolution, and learn the truth about her parents, even if it means she has to sacrifice herself — and the lives of others?

The Revolutions of Caitlin Kelman is a thrilling debut from Matthew Luddon. Learn more about the Kelman Chronicles, keep up with new releases and get in touch with the author at zoerosebooks.com