Yes, I am aware that it’s stupidly early in the morning, I had to get up to come down  to the bathroom. And check my bank account. It’s ESA day and I get twitchy if I don’t check the money is in my account as early as I possibly can (after 3 a.m. is about the right time).

Anyway, on to the dissertation.

After my grousing last week, I have done a substantial re-write, taking into account my supervisor’s criticisms and feedback. There is now substantially more narrative. Lucie has been put front and centre, and I have made it obvious right from the start that she is autistic. I have tried to describe the sensory overload, the social anxiety, the lack of social skills and awareness that I feel and that is common for autistic women. The first 13,000 words cover twelve chapters rather than fourteen now and I’ve added more of Lucie’s life outside of work, including her hobbies. She likes to take photographs, and when she can’t sleep wanders around Lincoln taking night pictures. I’ve added her internal monologue, thoughts and her reactions to stimuli.

I’ve been doing some research for my essay. I wanted to focus solely on the depiction of autistic women in crime fiction – I have three examples – but I’ve gone with some of my earlier subjects as well. All three of the examples I have, of explicitly or fan-labelled autistic women detectives are the autistic savant types – playing up to the stereotype that we’re all socially-inept geniuses.

I’m trying out some of my thoughts on you all, don’t worry, it’s part of the process for my essay writing. Next week I’ll probably talk about conventions of crime fiction.

Most of the autistic women I’ve come into contact with are not entirely socially inept or geniuses, we’re average, ordinary women. I have a book called ‘Ultraviolet Voices’, written by autistic women and produced by Autism West Midlands, (Thanks, Ollie!) that I’m going to read, and probably use as a reference, because I’m pretty certain my supervisor won’t accept observing a Facebook group for autistic women as a reference.

What I’ve noticed in my interactions and reading is, we’re people. Normal, ordinary people. People who have homes, jobs, marriages and kids. Or not. Some of us live with our parents or carers, and probably always will. Some of us function only in certain environments, some can function in public and collapse in private. Some of us have friends, some of us don’t. Some of us have an education, some struggled with school but know a lot about specific subjects because that’s what they’re interested in. We have hobbies, too. You know, just like neurotypical people.

But our behaviour is pathologised because we process and react to stimuli differently.

Because the world is full of shit and humans don’t like it when you point out they’re talking crap and lying to each other to placate some social rule that makes no sense.

So, in my essay I want to write about the stereotype of autistic women, and the reality. Lucie is more like the autistic women I’ve come into contact with. She struggles because her autism makes some things more difficult. She leaves a lot of the human contact to her constable, Robbie, because people like him and he doesn’t tend to accidentally distress them. She’s learnt that telling a witness, ‘yes, if you’d let yourself in at nine, you might have saved him‘ is a bad idea; so she stays quiet, even if she thinks it. But she’s had to learn to do that. She doesn’t like the rest of the team being in her office, making a noise and a mess. She adapts, with noise-cancelling headphones and building a file fort on her desk to block them out, the way I built a wall of books to separate my part of the bedroom from my sister’s when we were teenagers. She has done what we all do, learnt to adapt, learnt to mask, learnt to mimic neurotypical behaviour to survive. It’s bloody hard work and exhausting, by the way.

In my novel, I want to write a realistic, non-savant autistic woman, who happens to be a police detective sergeant.

I have taken out some things. When I experimentally changed them, it made no difference to the story so the changes stayed. I’ve tried to rein in the stereotypes, even though I’m basing some of the older men that Lucie works with on older men I have worked with in the past. Talking of stereotypes (again), Lucie doesn’t realise that she’s stereotyped her colleagues. She assumes none of them like her, because in the past a certain demographic doesn’t like her. She sees others’ prejudices for what they are, but doesn’t necessarily recognise her own.

Right, time to close and get back to sleep. It’s half four in the morning.

Oh, oh, I meant to tell you all, I won a book! It’s called ‘The Guide To Good Mental Health on the Autism Spectrum’, by Jeanette Purkis, Dr Emma Goodall and Dr Jane Nugent. The ‘Neurodiversity Goddess’ page organiser ran the competition when she reached ‘500 likes’. The book has 4.22 stars out of 5 on goodreads and the reviews are excellent. Can’t wait to get it. It’s travelling from Tasmania, so I’ll have to wait a bit. 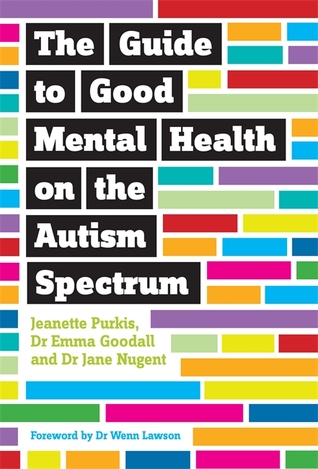