I haven’t been reviewing many books outside of my scheduled reviews this month, but yesterday a package of books arrived from Moon Books. The first of those that I’ve chosen to review is this book, since today is official publication day.

END_OF_DOCUMENT_TOKEN_TO_BE_REPLACED

Twelve-year-old Charlie Watkins could have inherited his dad’s massive intellect.
He got his massive feet instead.

Perhaps if Charlie had that intellect he might have been able to figure out why so many men in suits were suddenly following him or where his dad hid the Cubit – a mythical object that men have sworn to protect and even more have died trying to possess – before his so-called accident.

If starting yet another new school wasn’t bad enough, Charlie meets Mr Leopold, a disfigured, mind-reading lunatic and discovers that he alone must find the Cubit if he is to save his dad. The Brotherhood, however, have other ideas. Led by the ruthless Draganovic, they will stop at nothing to get their hands on it. With the help of Mr Leopold and fellow new boy Elvis, Charlie sets out on The Cubit Quest.

Hunting for the Cubit, playing football, lessons with the dreaded Funeral Face and unsuccessfully avoiding school bully Grimshaw by day, Charlie finds his nights no less complicated. Stalked in his dreams, he’s soon immersed in a world of power struggles, battling dragons and duels to the death. With the Brotherhood hot on his heels and as the bullets begin to fly, there are no guarantees that Charlie, or anyone else, will make it to the end in one piece.

END_OF_DOCUMENT_TOKEN_TO_BE_REPLACED

Retreating from an airborne virus with a uniquely unsettling symptom, property developer Jason escapes London for his country estate, where he is forced to negotiate a new way of living with an assortment of fellow survivors.

Far in the future, an isolated community of descendants continue to farm this same estate. Among their most treasured possessions are a few books, including a copy of Jane Eyre, from which they have constructed their hierarchies, rituals and beliefs. When 15-year-old Agnes begins to record the events of her life, she has no idea what consequences will follow. Locked away for her transgressions, she escapes to the urban ruins and a kind of freedom, but must decide where her future lies.

These two stories interweave, illuminating each other in unexpected ways and offering long vistas of loss, regeneration and wonder.

The Book of Air is a story of survival, the shaping of memory and the enduring impulse to find meaning in a turbulent world.

END_OF_DOCUMENT_TOKEN_TO_BE_REPLACED

Last Wednesday was our last day before the Easter break, and to make up for some of the weeks lost because the tutor was ill, we had a extra session in the morning. The morning session cover basic grammar questions and pamphlet production, and flash fiction. The usual afternoon workshop covered ‘found’/re-purposed fiction. Can’t say I was too fussed by either workshop, but I had had an early start and a long wait between. I left at five in the afternoon, because it was a long enough day without staying and having to wait for the 20:02 train back to Grimsby.

Patrick Phelan is an ageing artist who has never made it big but who somehow manages to live on air in a North London suburb.

When not running art classes for amateurs, Patrick wrestles in the shed at the bottom of his garden with his life’s work: a series of visionary canvases of The Seven Seals.

When his wheeler-dealer son Marty turns up with a commission from a rich client for some copies of paintings by modern masters, Phelan reluctantly agrees; it means money for his ex-wife Moira. However the deal with Marty is, typically, not what it seems.

What follows is a complex chain of events involving fakery, fraud, kidnapping, murder, the Russian Mafia and a cast of dubious art world characters. A contemporary spin on Joyce Cary’s classic satire The Horse’s Mouth, The Horse’s Arse by Laura Gascoigne is a crime thriller-cum-comic-fable that poses the serious question: where does art go from here?

END_OF_DOCUMENT_TOKEN_TO_BE_REPLACED

Next week I’ll be taking part in the Clink Street Spring Reads blog tour. I’m looking forward to reviewing the books for you. I’m reading the first of three books now.

Technically, the nephew is reading one of the books for me, because it’s aimed at his age group, but I’ll be writing the review based on his comments. He has a wobbly if I make him write the reviews. I’d planned to read and review it myself, but then I realised I was being a bit ambitious, especially with everything going on at the moment. Sometimes, you have to share the burden.

As Montrealer Catherine Day sets foot in a remote fishing village and starts asking around about her birth mother, the body of a woman dredges up in a fisherman’s nets. Not just any woman, though: Marie Garant, an elusive, nomadic sailor and unbridled beauty who once tied many a man’s heart in knots. Detective Sergeant Joaquin Morales, newly drafted to the area from the suburbs of Montreal, barely has time to unpack his suitcase before he’s thrown into the deep end of the investigation. On Quebec’s outlying Gaspe Peninsula, the truth can be slippery, especially down on the fishermen’s wharves.

END_OF_DOCUMENT_TOKEN_TO_BE_REPLACED

I get to see my psychologist again next Monday, and it’ll be the appointment I have with the clinical psychiatrist too.

I’ve been writing things down. Yesterday I spent an hour writing about my weekly routine and my work history.

END_OF_DOCUMENT_TOKEN_TO_BE_REPLACED 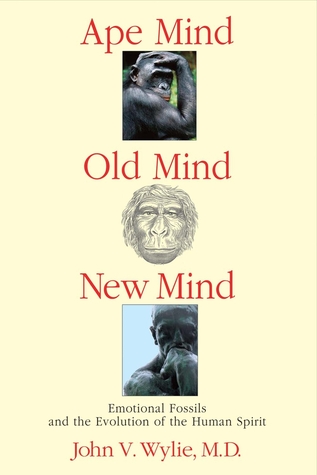 Ape Mind, Old Mind, New Mind is a personal memoir by a psychiatrist who gradually discovers from his patient’s descriptions of their mental illnesses that human motivations have been evolved over millions of years for productive engagement rather than competitive fitness. A new uplifting and spiritual view of human nature emerges that is not only consistent with the science of human evolution, but also opens up a simple explanation for such ancient mysteries as self-awareness, reflective thought, and the vast complexity of language.
All other books about the evolution of emotion approach it from the “outside” as an object; this book is about the biological evolution of the “inside” experience of emotion-and-motivation, which can only be known empathetically.

END_OF_DOCUMENT_TOKEN_TO_BE_REPLACED

I’ll be reviewing this book at the beginning of April, and I’m looking forward to reading it. Sarah Hardy organised the blog tour and I want to thank her for the opportunity to take part.

Social worker Johnny Malkin is battling a crippling workload and a hostile local community. That’s on a good day: things are about to get a whole lot worse.

Two fourteen-year-old girls are found wandering Aitken Wood on the slopes of Pendle Hill, claiming to have been raped by a gang of men. With no female social workers available, Johnny is assigned to their case. But what, at first, looks like yet another incident of child exploitation takes a sinister turn when the girls start speaking of a forthcoming apocalypse.

When Johnny interviews one of the girls, Jenna Dunham, her story starts to unravel. His investigation draws him into a tight-knit village community in the shadow of Pendle Hill, where whispers of witchcraft and child abuse go back to the Middle Ages.

One name recurs: The Hobbledy Man. Is he responsible for the outbreaks of violence sweeping across the country?

Is he more than just myth?

Paul Southern was born in the 1960s to itinerant parents who moved from city to city. He lived in Liverpool, Belfast, London and Leeds, then escaped to university, where he nearly died of a brain haemorrhage. After an unexpected recovery, he co-formed an underground indie group (Sexus). Made immediate plans to become rich and famous, but ended up in Manchester. Shared a house with mice, cockroaches, and slugs; shared the street with criminals. Five years later, hit the big time with a Warners record deal. Concerts at Shepherd’s Bush Empire, Melody Maker front cover, Smash Hits Single of the Week, Radio 1 and EastEnders. Mixed with the really rich and famous. Then mixed with lawyers. Ended up back in Manchester, broke. He got a PhD in English (he is the world’s leading authority on Tennyson’s stage plays!), then wrote his first novel, The Craze, based on his experiences of the Muslim community. He has three other published books and has written for ITV. He was shortlisted for a CWA Dagger award in 2002 and received positive reviews from national and international press, including The Guardian, Arena, Radio 4, Ladsmag, and Kirkus, amongst many others.