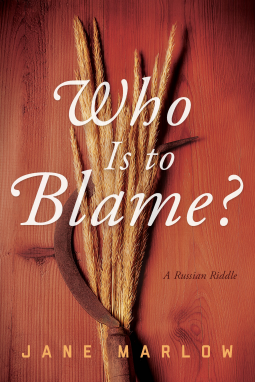 Set during the mid-1800s in the vast grain fields of Russian, Who Is to Blame? follows the lives of two star-crossed serfs, Elizaveta and Feodor, torn apart by their own families and the Church while simultaneously trapped in the inhumane life of poverty to which they were born.

At the other end of the spectrum, Count Maximov and his family struggle to maintain harmony amidst a tapestry of deception and debauchery woven by the Count’s son. The plot twists further when the Tsar emancipates twenty million serfs from bondage while the rural gentry’s life of privilege and carelessness has taken its final bow and much of Russia’s nobility faces possible financial ruin.

I found this novel of daily life in 19th century Russia absorbing and affecting. The daily struggles of Elisaveta and her families, and the struggles of the Maximovs at the other end of the rural social spectrum are a contrast that highlights the time and place in a way that purely factual books struggle to, by adding the human element. It’s well written and the characters are well-developed, rounded and believable.

I’m not normally a reader of literary fiction, preferring genre fiction, but this was good. Thought provoking, character lead and a discernible plot.