Sixteen days into 2017 and I have finally go a couple of book reviews for you. 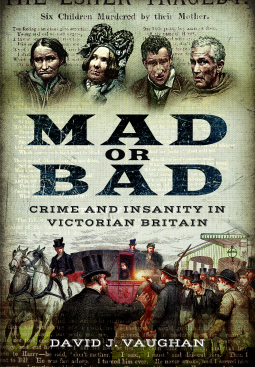 In a violent 19th century, desperate attempts by the alienists – a new wave of ‘mad-doctor’ – brought the insanity plea into Victorian courts. Defining psychological conditions in an attempt at acquittal, they faced ridicule, obstruction – even professional ruin – as they strived for acceptance and struggled for change. It left ‘mad people’ hanged for offences they could not remember, and ‘bad’ people freed on unscrupulous pleas.

Written in accessible language, this book – unlike any before it – retells twenty-five cases, from the renowned to obscure, including an attempt to murder a bemused Queen Victoria; the poisoner Dove and the much-feared magician; the king’s former wet-nurse who slaughtered six children; the worst serial killer in Britain…and more.

A Who’s Who introduces the principal players – life-saving medics, like Maudsley and Bucknill; intransigent lawyers like Bramwell and Parke., while a convenient Glossary of ‘terms and conditions’: ranging from ‘Insane on Arraignment’ to Her Majesty’s Pleasure, ‘Ticket of Leave’ to ‘Burden of Proof’, helps to explain the outcomes of the cases.

A History of Debate explains the titular subject – through graspable language and a window in time. How the ones found ‘not guilty on the grounds of insanity’ were curiously handled in Victorian law.

A chapter devoted to madness and women – from hysteria to murder, ‘monthly madness’ to crime. Raising opportune questions about the issue of gender, and exposing the truths of a masculine world.

The cases presented were an interesting introduction ton the subject and reasonable well handled, using primary sources. However, the layout was confusing and more could have been do to put the cases in context. As it stand the structure encourages confusion and doesn’t give much context to each case and the overall picture of Victorian legal attitudes to ‘madness’ is disjointed.

Needs work. It would probably have worked better in a narrative style, with everything integrated. 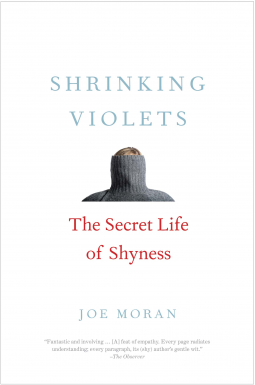 A deeply perceptive and beautifully written cultural history of shyness, from one of our most astute observers of the everyday

Shyness is a pervasive human trait: even most extroverts know what it is like to stand tongue-tied at the fringe of an unfamiliar group or flush with embarrassment at being the unwelcome centre of attention. And yet the cultural history of shyness has remained largely unwritten—until now.

With incisiveness, passion, and humour, Joe Moran offers an eclectic and original exploration of what it means to be a “shrinking violet.” Along the way, he provides a collective biography of shyness through portraits of such shy individuals as Charles Darwin, Charles Schulz, Garrison Keillor, and Agatha Christie, among many others. In their stories often both heartbreaking and inspiring and through the myriad ways scientists and thinkers have tried to explain and “cure” shyness, Moran finds hope. To be shy, he decides, is not simply a burden; it is also a gift, a different way of seeing the world that can be both enriching and inspiring.

Joe Moran is professor of English and cultural history at Liverpool John Moores University. His previous books include On Roads: A Hidden History, which was longlisted for the Samuel Johnson Prize. He lives in Liverpool, UK.

This was an insightful book, giving the reader and insight into historical references, and attitudes to, shyness, from ancient Greek philosophy to modern musicians. The writing was easy to follow and the structure logical. The language was easy to understand and the the writing passionate.