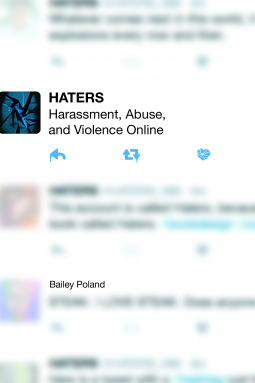 Cybersexism is rampant and can exact an astonishingly high cost. In some cases, the final result is suicide.

Bullying, stalking, and trolling are just the beginning. Extreme examples such as GamerGate get publicized, but otherwise the online abuse of women is largely underreported. Haters combines a history of online sexism with suggestions for solutions.

Gendered abuse online is a serious problem, whether it’s an unsolicited dick pic or a deluge of  rape and death threats on Twitter, doxing or SWATting. The usual response is to ignore it, block, don’t go online, don’t feed the trolls. But why do people feel the need to abuse others on the ‘net?

Poland argues, with great clarity and very convincingly (as though we need convincing of the self-evidence), that the cause of the abuse has nothing to do with the victims and everything to do with the perpetrators. Whatever response is made the abuse continues. Poland suggests that it derives from the belief that women are invading a male space. The stereotype of the white, nerdy guy living through the internet still hangs around from the 1990’s and that the causes of online sexism are the same as offline sexism moved in to  different space. Usually sexists are completely ignorant of the role women have played in the development of computers and the internet (and most other technology) because it doesn’t fit their stereotypes of women.

Poland continues from discussing the general history of online abuse, to specific examples, then the advice that is usually given to victims of abuse. The uselessness of this advice is dissected and then the author goes on to consider other strategies, followed y a final chapter on cyberfeminism, a type of utopian feminism based on the internet from the 1990’s in which proponents suggested that as unidentifiable individual online (a androgynous cyborg) the internet would be a level playing field.

Obviously that hasn’t happened; as we integrate offline and online worlds for work and leisure it is harder than ever to keep identifying details offline and impossible for those who owe their livelihoods to the internet, or use the internet to share their work and network. This means that attitudes are brought from the offline world into the online world when we’re confronted with someone not like us. You can be a decent human and treat everyone with basic dignity and respect, or you can be a bigot. If you’re a bigot in meat-space the chances are you’re going to be a bigot online.

Poland finishes her book with a round up of organisations helping victims of online harassment, stalking, abuse and violence.

She uses examples throughout of abuse she and others have received, the responses of other people to their abuse as well as that of websites and legal authorities. It was very depressing.

It’s very interesting and thought provoking, but the same things come out of it as come out of rape discussions, domestic violence, violence in general: don’t tell the victims how to prevent abuse, teach the perpetrators not to abuse. The victim is never responsible, the abuser makes the choice to abuse, so the abuser is the one who needs to change their behaviour.

Yesterday a Facebook page I follow shared a sample of some of the abuse they receive on a daily basis, in the last month other pages – from transgender artists to feminist groups and science pages – have been sharing examples  the abuse they receive; most of them get the same stuff over and over again, none of it original and all indicative of the abusers’ fear and ignorance. It just so happened that I was reading this book while at the same time as the pages were sharing their experiences, and some of their responses. Humour seems to be a common response as well as attempts to educate, and of course the fall back of blocking. The examples I saw nicely illustrated the book I was reading. The book gave me a bit more understanding of the causes of online abuse and the effect of that abuse on the victims, as well as resources available to those being harassed.

There was some repetition but it didn’t detract from the overall theme and quality of the book. Well worth a read.