I’ve been quiet, haven’t I? I haven’t forgotten you, and I’m busy working my way through a variety of books so I can review them for you, but I have been very ill. This cold isn’t giving up easily and I’ve had to spend three days in bed. I’ve also had a household appliance crisis. My fridge freezer died on Christmas Day; the funeral is this afternoon, just as soon as the replacement gets delivered. I’ve been using the freezer as a refrigerator, my kitchen is colder than the fridge. I’m getting quite worried about the cheese. END_OF_DOCUMENT_TOKEN_TO_BE_REPLACED

To all my readers, Seasons Greetings, whatever you celebrate.

I’ve only been away overnight but it’s nice to be home, snuggling with my doggies. I had a lovely couple of days in Harrogate with my friends. END_OF_DOCUMENT_TOKEN_TO_BE_REPLACED

I’ve got the house decorated. 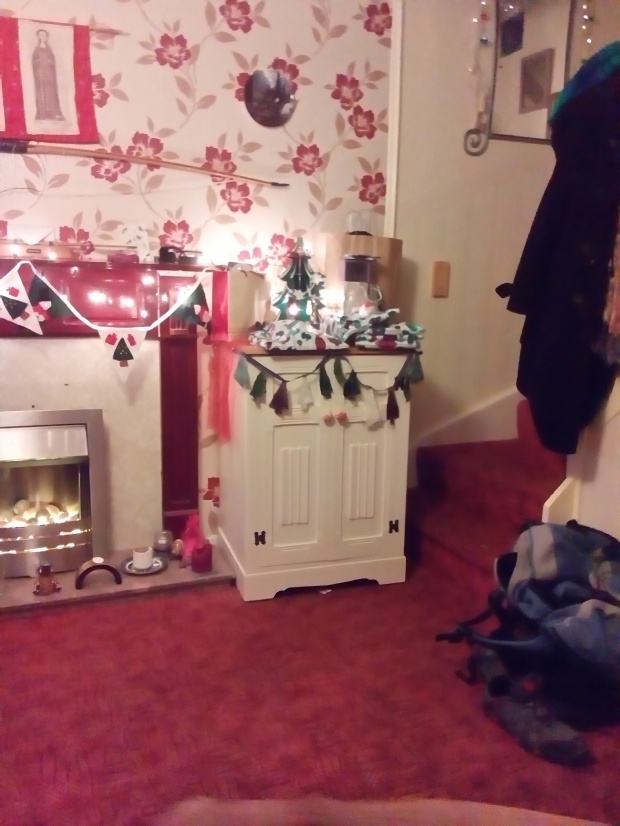 My cardboard Yule tree, bought from The woodland Trust five or six years ago. 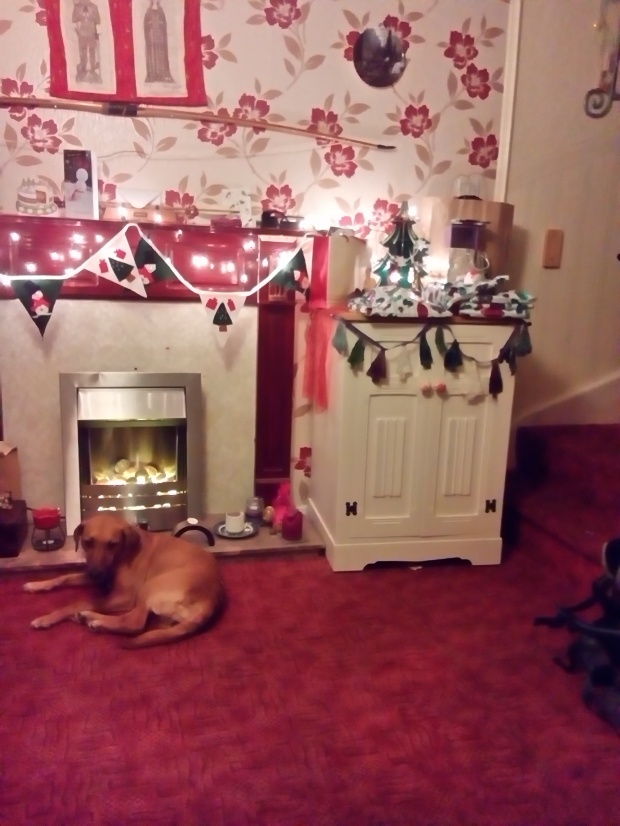 Ezzie approves of the decoration and the new electric fire

[Alter pictures to come next week]

I usually wait until the 21st; I had planned to go shopping this afternoon but my stomach problems are giving me trouble so I stayed home and decorated. I’m also busy this weekend, and not free until Wednesday, so today is a good a day as any.

Evening all, how are you all? I have a cold, I also have Netflix now. That will become relevant later.

I’m working on my novel again, or trying to write every day. The dogs don’t like it, my knee is for their heads to rest on and my hands are for stroking them, according to the Hell Hounds, not for tapping away at my laptop trying to get a novel finished this year. I’m still studying my writing course, but I haven’t been well so I haven’t been working on the current assignment for a few months. The assignment is to write a piece for a travel magazine and to outline another on the same subject from a different angle. I haven’t travelled much so I’ll have to write something about Lincolnshire.

‘Netflix’ and other televisual things

Now I have ‘Netflix’ I can watch a few things that I like or wanted to see. I’ve been working on my ‘A Christmas Carol’ watching mission – how many versions of ‘A Christmas Carol’ can I see in December; I’ve managed two so far. I started watching ‘Jessica Jones’ and a few episodes of ‘Grimm’. I’ve also started watching ‘From Dusk ’til Dawn’, the series. I saw the film that the series is based on years ago, and while the story was good, the character played by Quentin Tarantino squicked me out with his sick rape fantasies. I thought the character of Richie Gecko was going to be the same in the series. Luckily, Zane Holt’s ‘Richie’ is a lot less vile (I honestly think that has to do with the actor rather than the character), and the longer format of a series rather than a film allows for better character and plot development. I’ve just finished watching series one, and am moving on to series two this evening.

I’ve been watching ‘The Last Kingdom’, the BBC series based on Bernard Cornwall’s Uhtred of Bebbanberg books. I really enjoyed it, and luckily so did my dad, so I had someone to discuss it with yesterday now that we’ve both seen all eight episodes. We’ve both read the first half dozen books too. I’ve tried to find my copy of ‘The Last Kingdom’ so that I can compare the books with the series, but I can’t find it. It has to be around somewhere but I still haven’t got all my books shelved and organised after moving more than 15 months ago. I still need at least one more set of book shelves; when I get them I’ll be able to arrange my books by author and series the way I want to. As it is I’m wracking my brains trying to remember the plot and characters. I like Brida much better in the series than in the books, as far as I remember, and Alfred is still as sanctimonious as ever. I really can’t stand Odda the Younger, but then I couldn’t stand him in the books either. If I remember correctly he was the same age as Uhtred in the books, and a large man. Seeing him played by a younger, smaller man who looks barely out of his teens grated slightly. It was nice to see him finally die though, the little scum bag traitor. I don’t like Asser either, but then I didn’t like him in the books either. Leofric was also one of my favourite characters in the series. Uhtred is a really good character and I think Alexander Dreymon is a really good actor.

The series is based on books, which mix history and fiction, and the series does the same thing. The distinctive styles of English and Danish dress and hairstyles, the tattoos and make-up, are deliberate constructs designed to separate the two visually. It’s something I noticed in ‘Vikings’ as well. There’s a distinct preference for the Danes in both series; they get all the best storylines, character (Brida vs. Mildreth), clothes and make up. Both also suggest the English didn’t know how to fight until some Dane came along and taught them too. Clearly neither production team know anything about early Anglo-Saxon history. Shields, contrary to ‘The Last Kingdom’ were circular, wooden and covered in leather, sometimes with decorative fittings. They were fairly successful in warfare if the available sources are to be believed. I do wish television and films would stop messing with history; if you’re going to make a film set in a specific period at least get the details right.

If they make a second series I hope they don’t screw up Æthelflæd, Alfred’s daughter, known as Lady of the Mercians (seriously, look her up, she’s cool. The Danes were going to surrender to her, but she died in the early tenth century just a few weeks two soon). Bernard Cornwall admitted in his books that he made the character of her husband, Athelred of Mercia, in to a much nastier character than he was in reality (again if the sources can be trusted).

It has been a funny month so far. I haven’t been great, to be honest. My brain has been more than a little bit scrambled. When someone says they’ll do something for me then backs out it makes me feel worthless and unwanted, like I’m a massive inconvenience to everyone. Rationally, I know that isn’t the case, but my brain isn’t being rational at that point. It took a few days to get over and I’ve had the odd off day since, but I’m not too bad at the minute. I keep getting tired and need to go to bed really early. But if I go to bed too soon I end up waking up at stupid o’clock in the morning. At which point I get up, wander round the house for a while, maybe do some cleaning then go back to bed and sleep until mid-morning. It’s really messing with my reading/writing/sewing schedule. 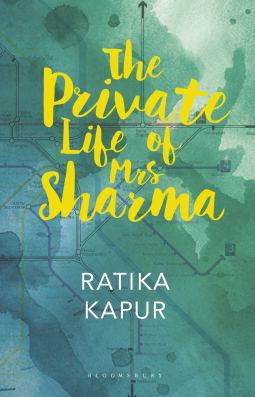 Renuka Sharma is a dutiful wife, mother, and daughter-in-law holding the fort in a modest rental in Delhi while her husband tries to rack up savings in Dubai. Working as a receptionist and committed to finding a place for her family in the New Indian Dream of air-conditioned malls and high paid jobs at multi-nationals, life is going as planned until the day she strikes up a conversation with an uncommonly self-possessed stranger at a Metro station. Because while Mrs Sharma may espouse traditional values, India is changing all around her, and it wouldn’t be the end of the world if she came out of her shell a little, would it?

With equal doses of humour and pathos, The Private Life of Mrs Sharma is a sharp-eyed examination of the clashing of tradition and modernity, from a dramatic new voice in Indian fiction

END_OF_DOCUMENT_TOKEN_TO_BE_REPLACED

Source: Benefits: Not Every Claimant is a Jeremy Kyle Pantomime Villain

Random thought as I lay in bed last night contemplating the shiny I’ve won in one of Sebastian Lokason’s giveaways – the prize is Vanir related but I won’t know which of the prizes I’ve won until it arrives later in the month -and the amber hair dodad/bracelet (made by Ember at EmberVoices) that I won earlier this year.

Something is afoot. And not just the funny shaped thing on the end of your leg.

Anyway, ignore the terrible joke, I do have a point.

The god known as Frey, Freyr, Ingvi Freyr, or Frea, has a personal name, recorded a Ing. ‘Frey‘ and the variants mentioned above are titles meaning ‘lord’.

The goddess known as Freya, Freyja, Freo, Frowe, on the other hand does not have a recorded personal name. Her ‘names’ are titles, all meaning ‘lady’. So the question arises, does She have a personal name and if so, what is it?